The Conservatives today pledged to increase funding for the NHS in England. Taking into account inflation, this would result in at least a £230m real terms cash injection for the English NHS next year (2018/19) to ensure spend per head doesn’t fall. However, we estimate the increase will be closer to £800m, rising to an annual increase of £1.9bn extra in 2020/21, compared to current spending plans. But it would leave a funding gap for the NHS in England of £12bn by 2020/21, according to analysis from the Health Foundation.

The Conservatives have committed to NHS funding being a total of £8bn higher in 2022/23 than current spending. The proposed funding would be higher than the government’s existing plans up to 2020/21, and would mean health care spending reaching £128.4bn in 2020/21, up from £123.7bn this year (17/18 prices). This would be below the minimum recommendations from the House of Lords’ Select Committee on the Long-Term Sustainability of the NHS, which called for health care funding to increase at least in line with GDP growth.

Under the Conservatives’ plans, health care spending would increase by an annual average of 1.2% a year between now and 2020/21. This is the same rate of NHS funding growth as under the coalition government (2009/10 to 2014/15). As a share of GDP, health care spending would decrease from 7.3% in 2016/17 to 7.2% in 2020/21. This compares with annual NHS funding growth of an average of nearly 4% a year in its first 70 years. The Conservatives’ funding pledge is below the independent Office for Budget Responsibility’s (OBR) projection of funding pressures on the service – over 4% a year above inflation.

In our recent briefing NHS and social care funding: three unavoidable challenges, the Health Foundation outlined that the pace of funding growth for the NHS will need to accelerate, taking a greater share of GDP. This will be necessary to keep pace with a growing and ageing population, rising chronic disease levels, as well as to meet public expectations for health care and fund new technologies and medical advances.

The Conservatives’ funding pledge would be very unlikely to meet growing demands (based on the most recent OBR projections) on the service or fund additional pay increases. To protect the quality of patient care would require the NHS to achieve average efficiency improvements of more than 3% a year. York University shows that the recent rate of improvement was below this at an average of 1.7% a year between 2009/10 and 2014/15.

‘The Conservatives’ proposals would mean NHS spending per person would not fall in real terms in the next two years, as currently planned. But it would leave a funding gap for the NHS in England of £12bn by 2020/21.

‘Under the Conservatives’ manifesto plans, health care funding would not match the demand and cost pressures on the health service, which the independent OBR estimates at more than 4% a year above inflation. A projected £12bn funding gap by 2020/21 would require the NHS to continue to deliver major efficiency savings if quality and access to services are to be protected.

‘This is a stark reminder of the task ahead if England is to secure a sustainable NHS. With an ageing and growing population, new technologies and significant workforce pressures, increasing efficiency by more than 3% a year for the next five years would be very challenging.’

If you would like the high resolution versions of these charts, please email mediaoffice@health.org.uk. 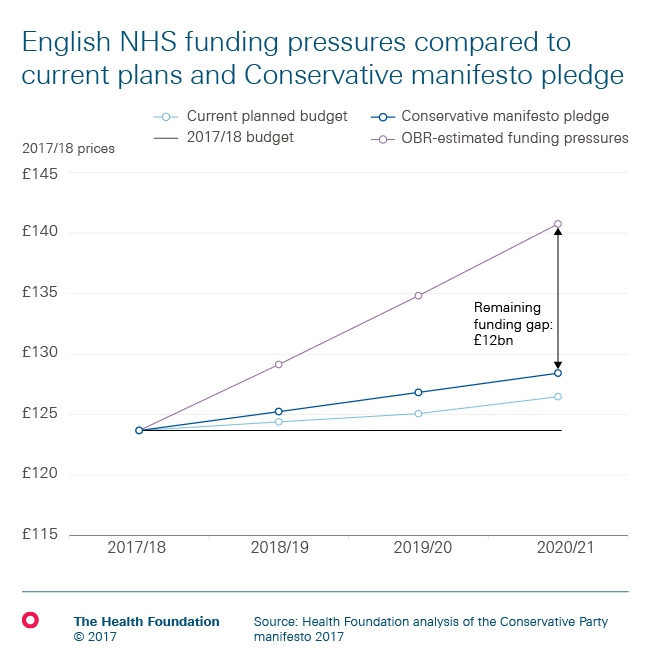 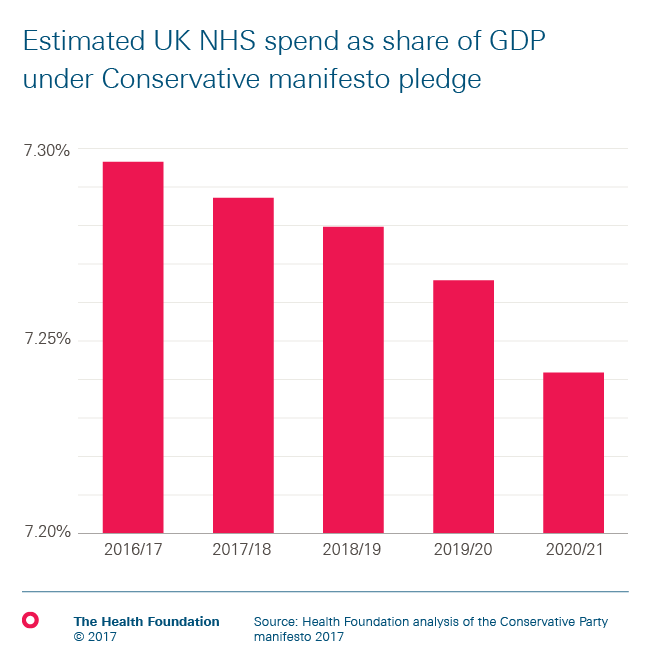 Health Foundation response to the publication of the Health and Social Care Select Committee's...

That was the year that was: health policy in 2021 – with Lord Victor Adebowale and Hugh Alderwick

Episode 15. In another year shaped by the COVID-19 pandemic, we explore some key health policy...

NEW: There is a strong relationship between debt and health. Our new analysis highlights that 20% of people in pr… https://t.co/3tkB2CWjJ8