Is the recent funding announcement enough for NHS England?

About 2 mins to read
Chart
Funding and sustainability 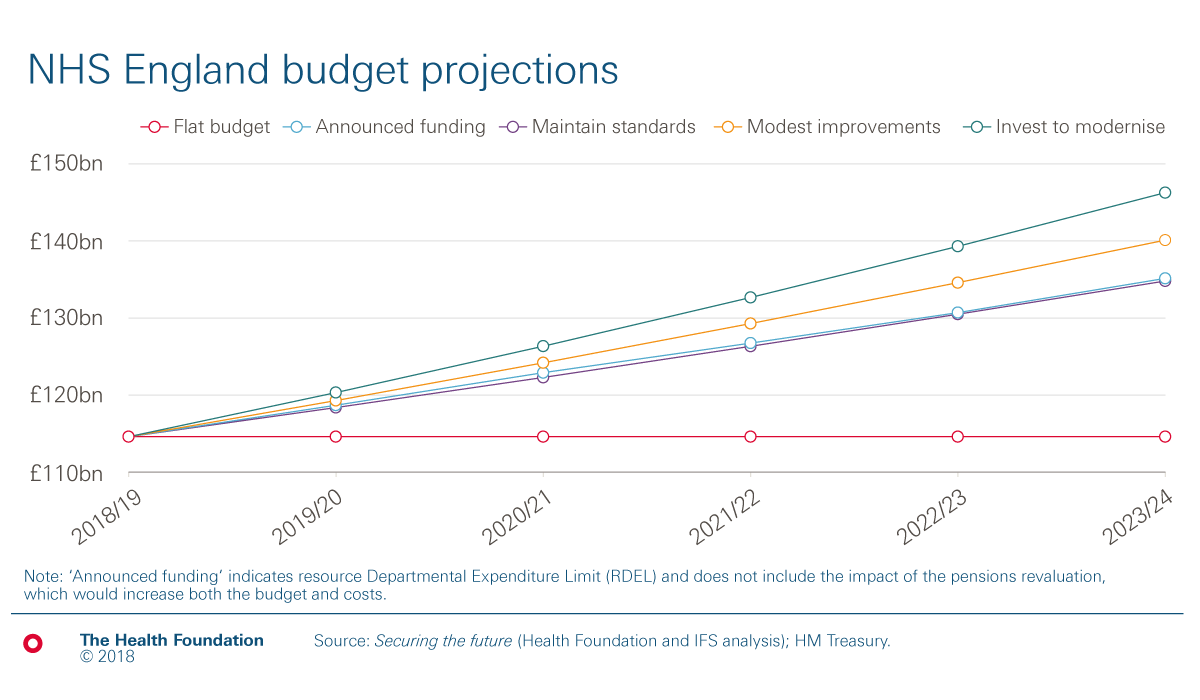 The Government announced on the 17th of June that there would be a long-expected funding increase for the NHS.

The announcement is that NHS England’s main budget will be £20.5bn larger in five years’ time than it is now (just less than £400m a week), growing at 3.4 per cent a year on average.

NHS England is the organisation in charge of distributing money to the NHS and so its current budget is £115bn of the Department of Health and Social Care’s total budget of £129bn. (This assumes the additional £800m cost of the new Agenda for Change pay deal is added on top of the DHSC’s current budget, rather than found from elsewhere in it.)

It is worth noting that this money is 'frontloaded' – in the first two years, the budget grows by 3.6 per cent, and then by lower amounts. There is also £1.25bn in cash terms a year extra (on top of this money) as a result of pension revaluation – although this is also a cost for the NHS so it’s not really an increase in funding, and may change depending on what the pension costs end up being.

As set out in our recent report with the IFS, Securing the future, these increases should allow spending to keep up with the pressures that come with a growing, ageing, and increasingly multimorbid population – as well as cost pressures that come from things like medicines getting more expensive and pay growth.

However, our analysis in Securing the future shows that this money is nowhere near enough to modernise the NHS and make serious investment in areas like mental health treatment and spending on buildings and equipment. This would require about 4 per cent a year over the next 15 years, and would likely need frontloaded investment of around 5 per cent a year over the next five years.

Likewise, this analysis was based on increases to the Department’s entire budget – not just NHS England’s budget – which includes much of public health and education and training. If funding in these areas does not rise in line with NHS England’s new settlement then the overall increase is likely to be closer to 3%, which is likely to result in the service being unable to maintain current standards of care.

Securing the future: funding health and social care to the 2030s

This research looks at how much health spending would need to rise to provide the level of service...

A tale of two hospitals: the pandemic and its aftermath in Berlin and London – with Professor Heyo Kroemer and Professor Tim Orchard

Episode 22. Professor Heyo Kroemer of the Charité in Berlin and Professor Tim Orchard of Imperial...

The Health Foundation will be holding multiple fringe events and partnering with other organisations...

COVID-19 has brought disruption to health care systems around the world. Our analysis explores how services in the… https://t.co/tyx1iYlxqR