About 9 mins to read
Chart
Funding and sustainability

This content was produced in January 2017 and is now out of date.

The UK currently spends over £140bn a year on public provision of health and over £20bn on social care. But how does that break down and how has spending changed over time? The charts below cover some of the key past, present and future trends in funding and activity across the UK and in England.

Please note that the data in these charts are in 2016/17 prices Using HM Treasury September 2016 GDP deflators.

We have tried, wherever possible, to present data for the whole of the UK, however in some instances this has not been possible and so we give an England-only picture.

More detail on the definitions used for health.

In 2015/16 the total spend on health in the UK was £140.6bn, nearly 11 times more than when it was established in 1948, in real terms. Public funding for health care has increased faster than economic growth, with the share of UK GDP more than doubling from 3.5% in 1949/50 to 7.4% in 2015/16. On average, spending has risen by 3.7% a year in real terms, but it hasn’t been a continued steady increase over this time – there have been periods of relatively high and low growth. 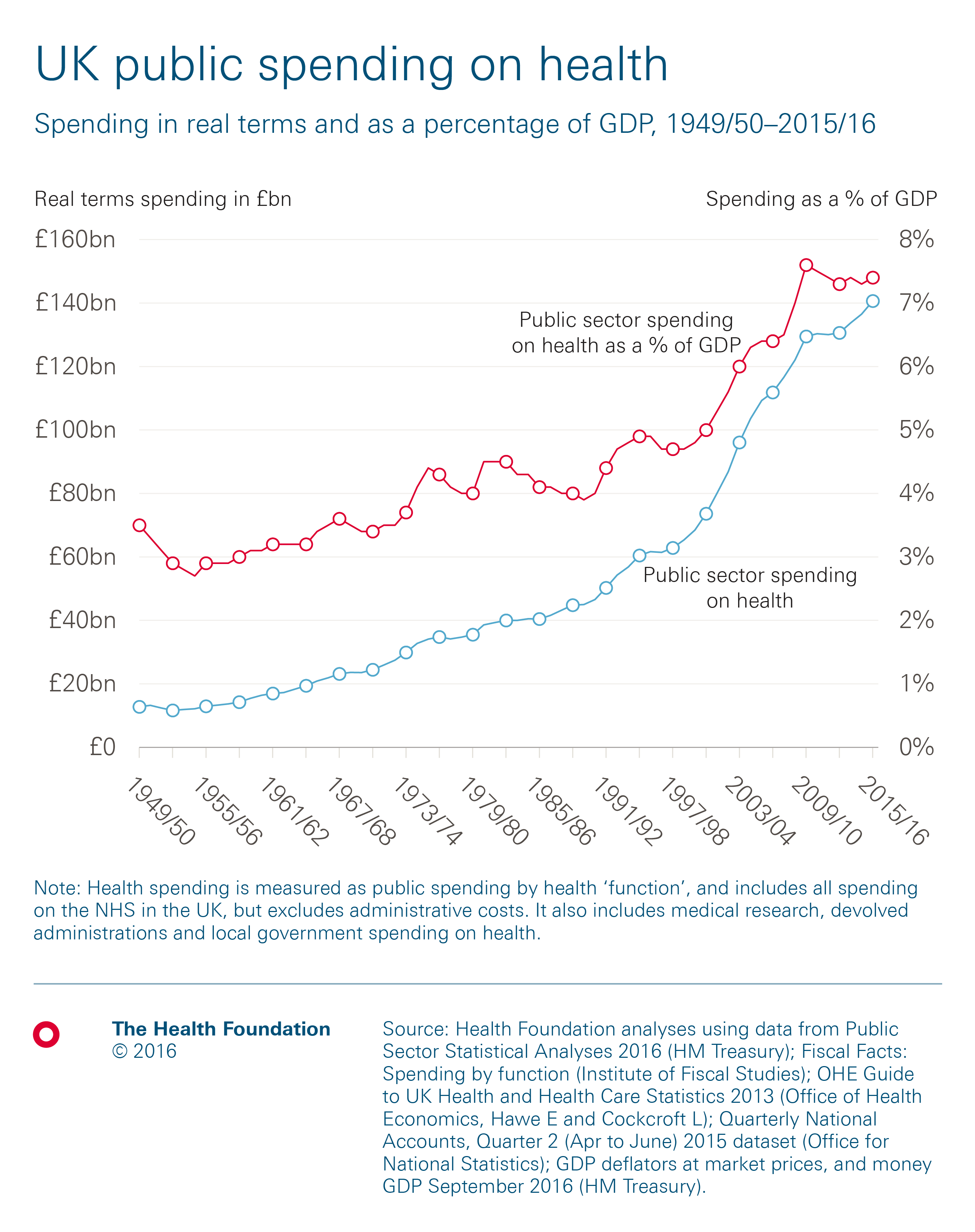 And what about spending on social care?

In 2015/16 about £16bn was spent on public provision of adult social services in England, based on net total spending. This figure is about £14bn if you do not include the transfers from the NHS to social care made through the Better Care Fund. Using this measure, this is twice the amount spent in 1994/95, but 17% lower than when spending was at its peak in 2010/11.

The amount spent on adult social care has decreased every year since 2010/11, if you do not include transfers from the NHS. If you do then there was a real terms increase this year. 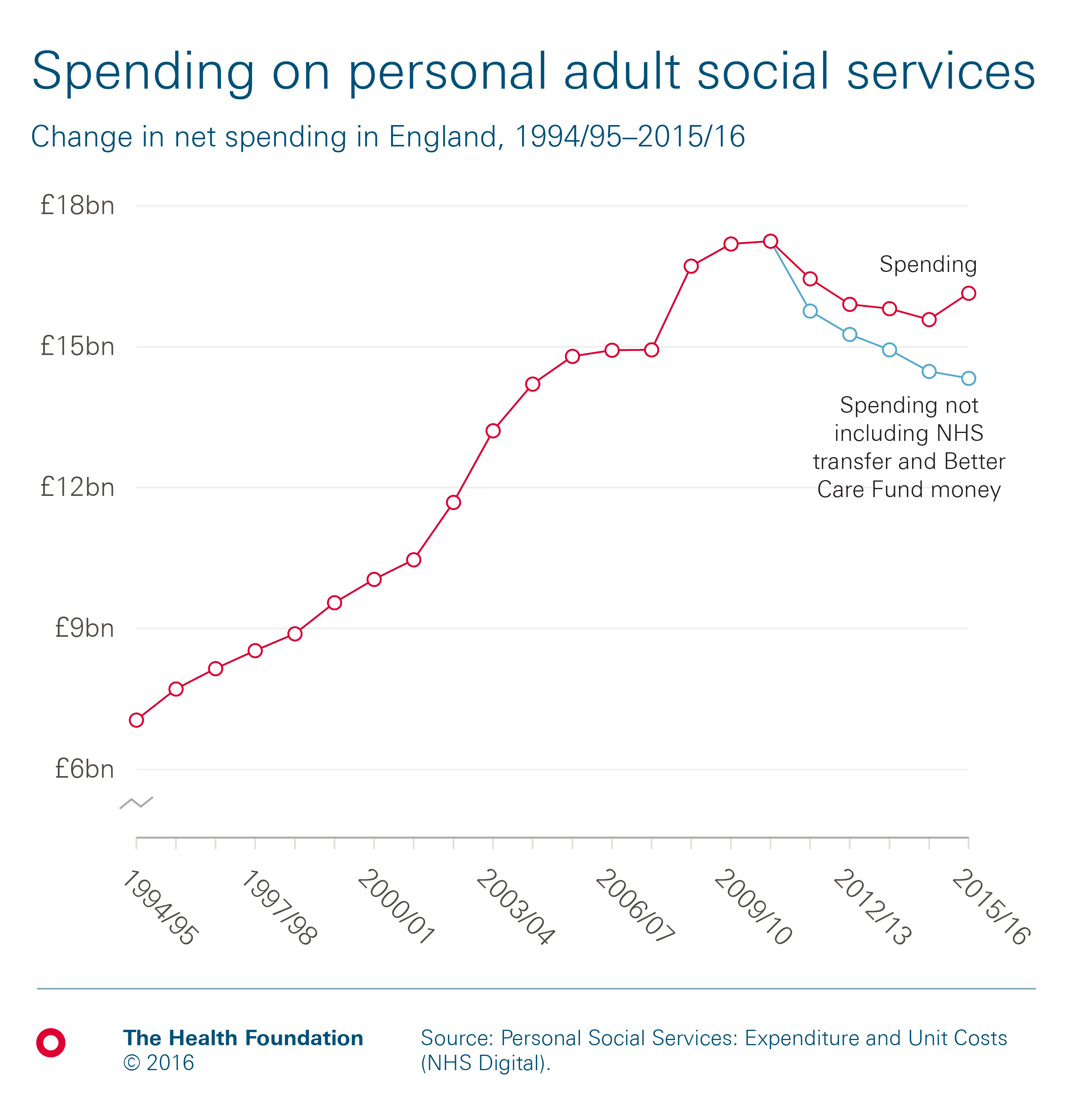 How has spending on health changed over different parliaments?

Public spending on health care is ultimately driven by the population need, resources available and national priorities. So while spending has increased at an average of 3.7% a year since the NHS was created, growth has varied between different parliaments. The highest rate of growth during any parliament was an average of 8.9% between 2001/02 and 2004/05, with a commitment by Tony Blair’s Labour government to raise spending on health care to the EU average.

A key priority for the coalition government between 2010/11 and 2014/15 was to reduce the national fiscal deficit. While health spending was protected relative to other public spending, this was one of the lowest periods of funding growth in the history of the NHS, rising by an average of 1.1% a year. 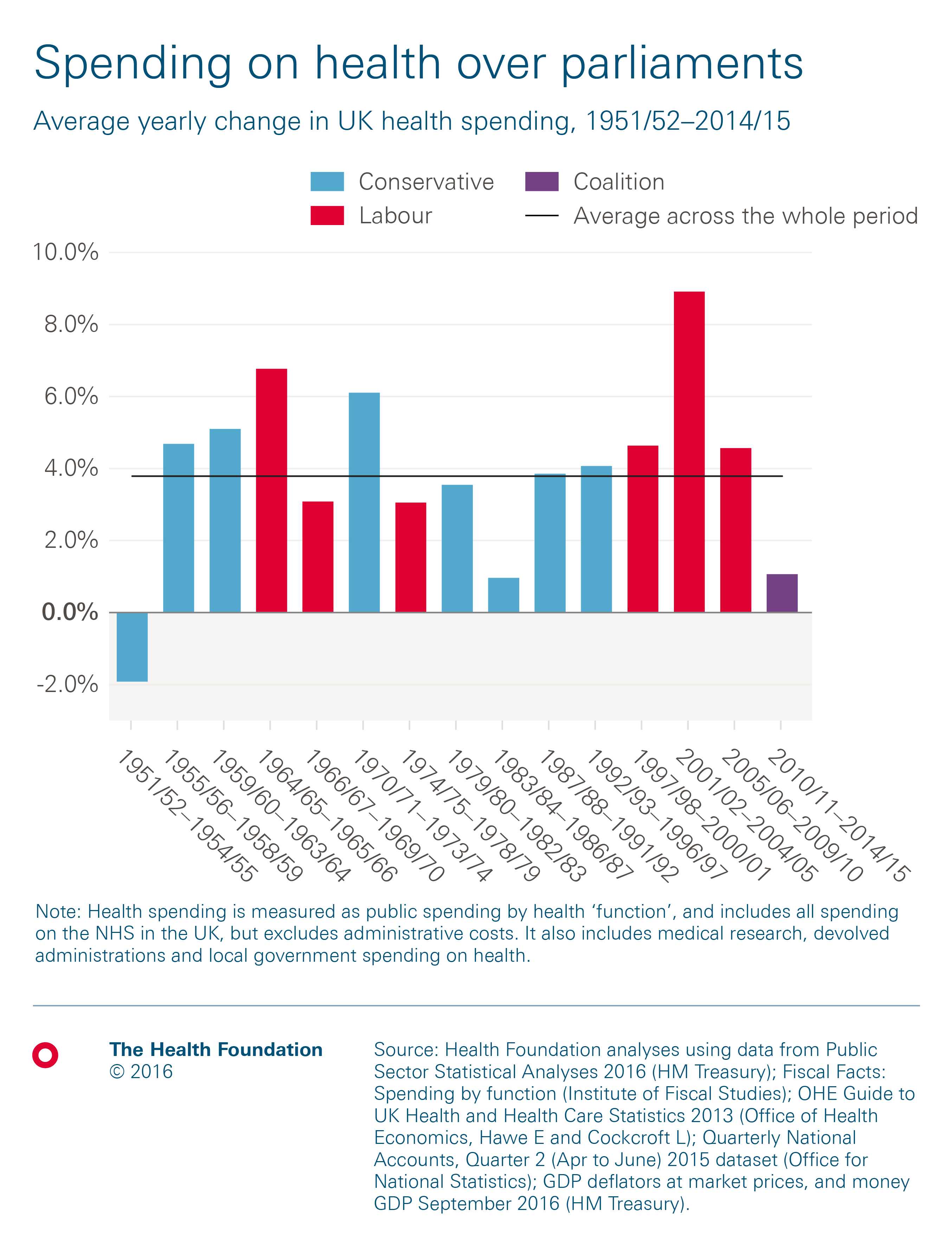 And how does the UK’s spending on health compare to other European countries?

Total spending on health in the UK was worth 9.9% of GDP in 2014. This is similar to the EU-14 average of 9.8%, excluding the UK (the EU-14 refers to the first 15 countries to join the EU, excluding the UK). The UK spends less on health as a percentage of GDP than eight of the other countries. 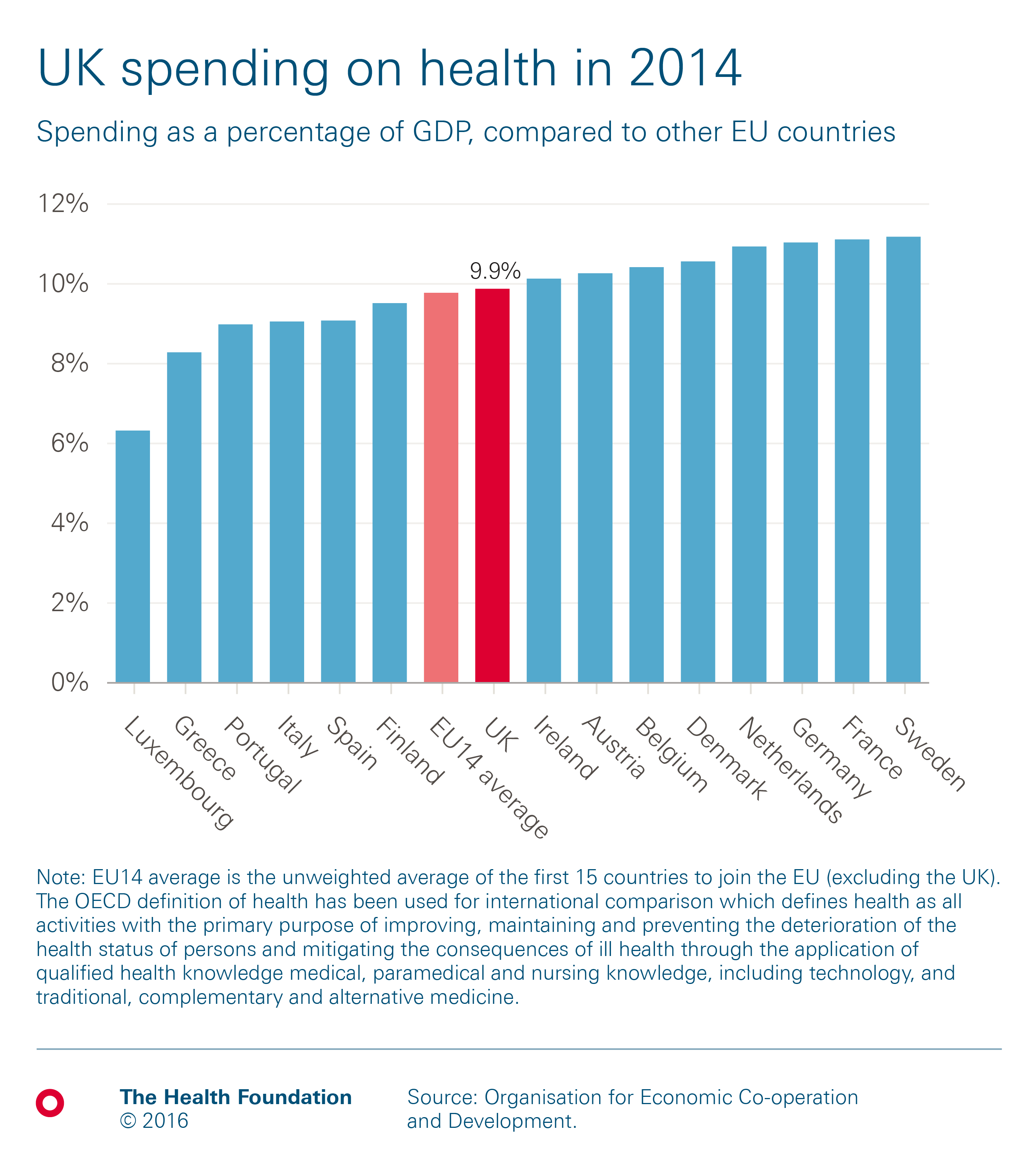 The majority (80%) of health in the UK is publicly funded, predominantly through the NHS. In 2014, the UK’s public spending on health was 7.9% of GDP. This was higher than the EU-14 average of 7.5%, but lower than five other countries in the group. This chart shows all spending either by government or by compulsory insurance schemes, which are more common in mainland Europe. 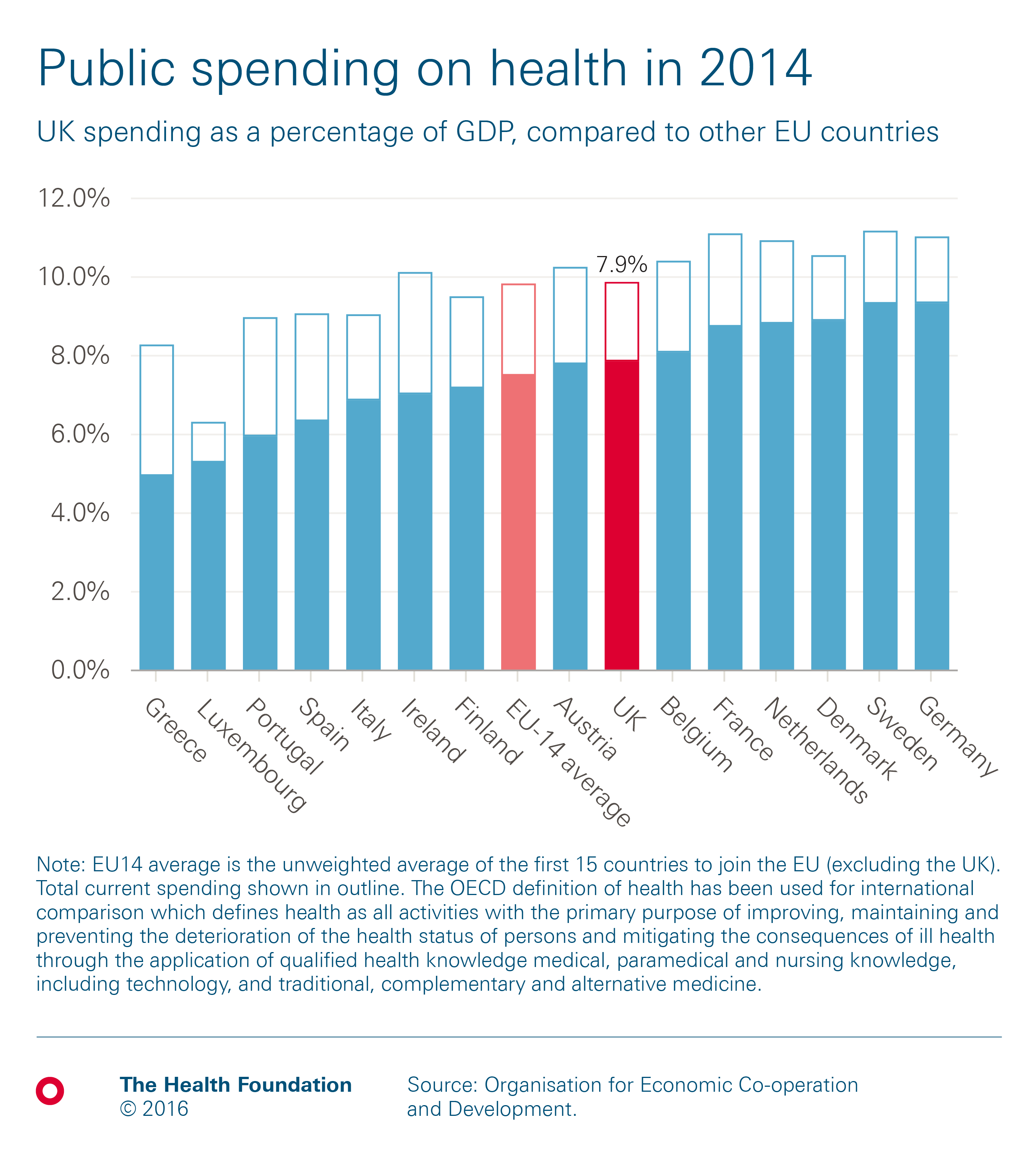 How does health spending differ between countries within the UK?

The simplest way to compare health spending across the UK is using spend per head. Although this doesn’t account for differences in the need for care, it provides a useful comparison.

Historically, health spending per head in the UK has been lowest in England and highest in Scotland. In all four countries, the amount has generally risen each year until 2009/10, after which patterns have diverged, reflecting different political decisions made by the respective government in each country.

In 2014/15, health spending per head across the four UK countries was: 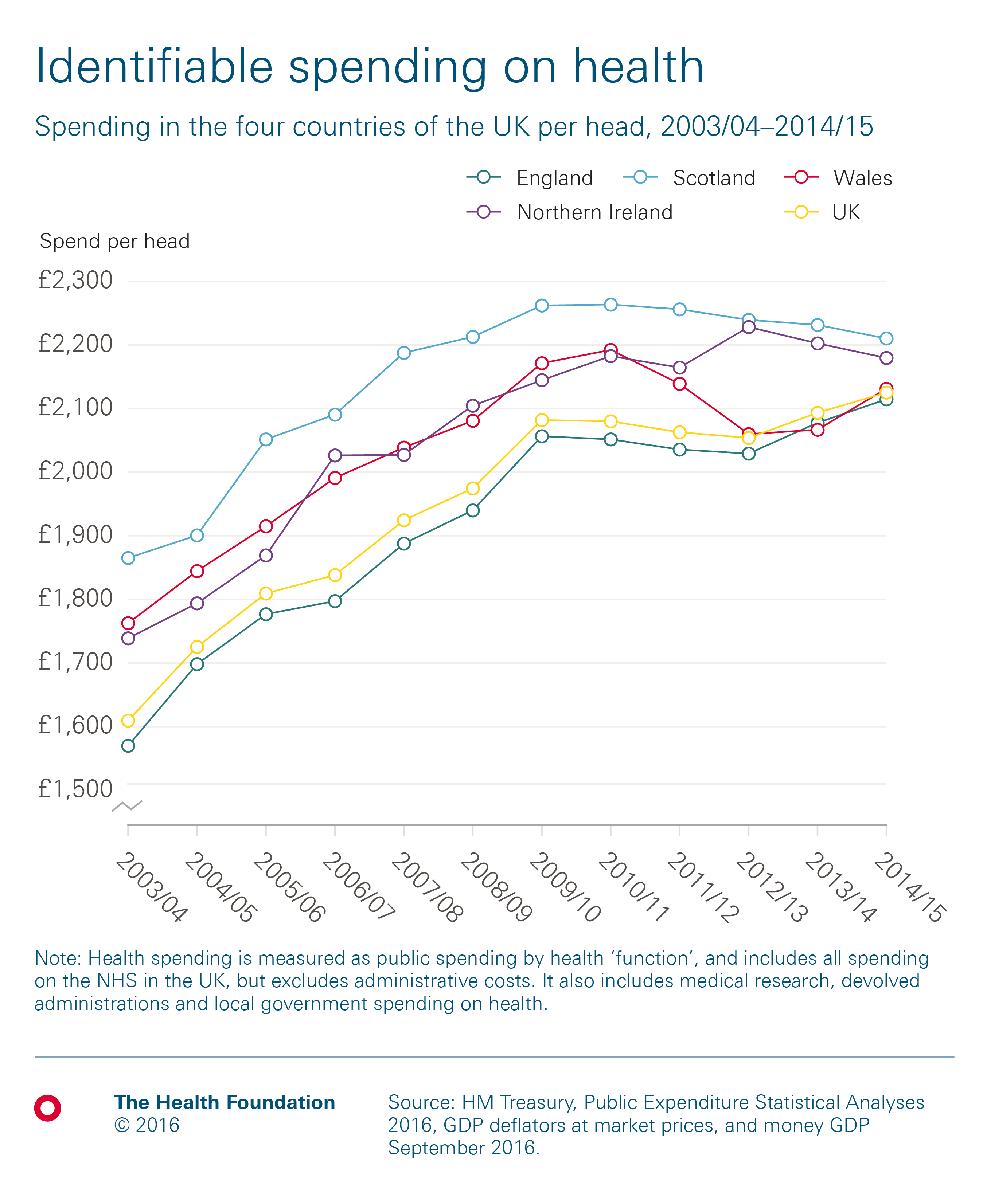 So how does spending per head on social care differ between the four countries?

Public spending on adult social care varies for each country in the UK, from £295 per head in England, to £435 in Scotland, both in real terms. This is partly explained by a difference in relative need for the populations, and decisions made by the respective devolved governments. 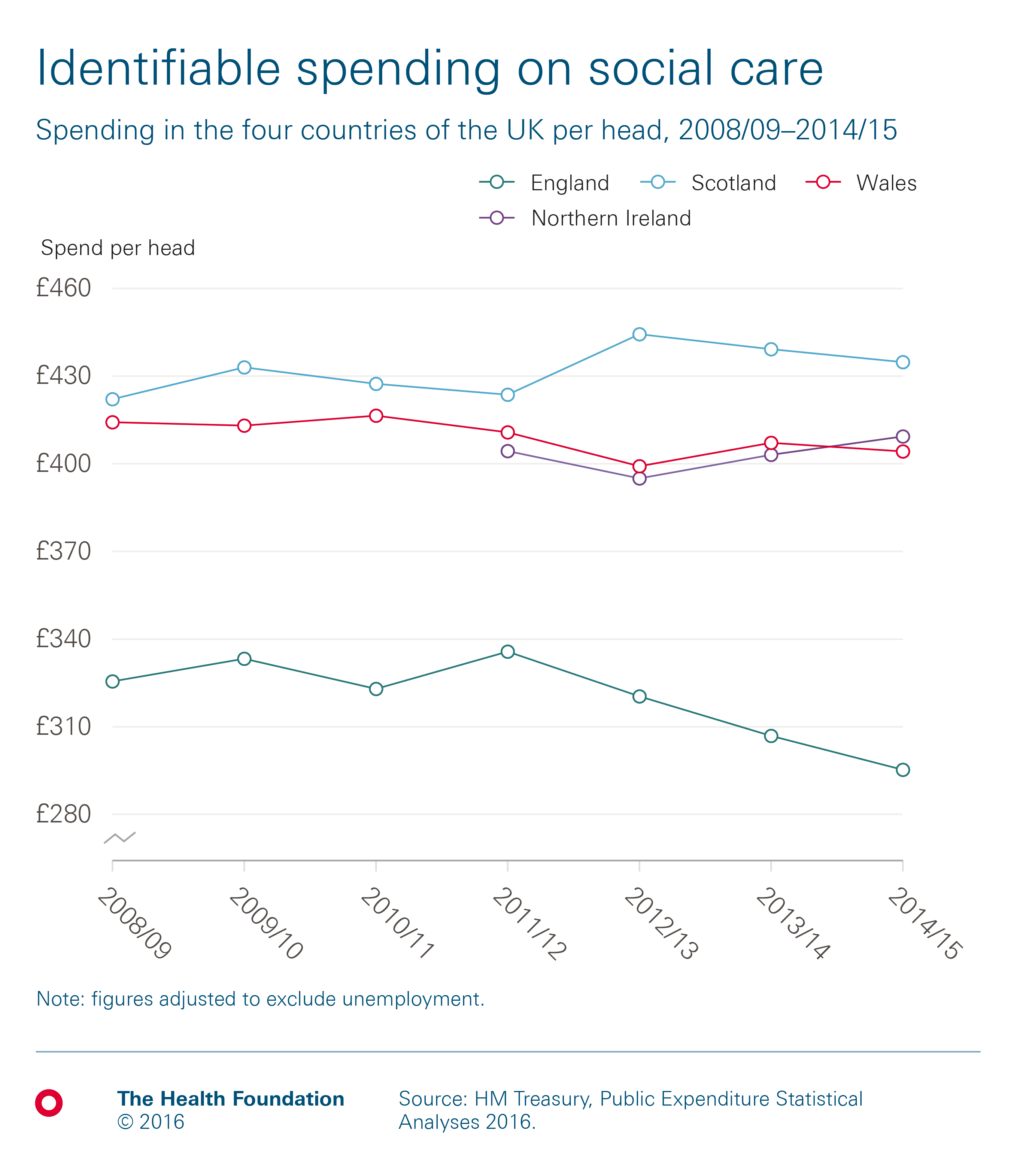 How has productivity grown?

Productivity in the health care sector is only growing slowly, and can’t compensate for these other pressures. Between 1997 and 2013, productivity across the UK NHS grew by an average of 0.9% a year. This is higher than the total productivity of the public sector (0.1%) but lower than that of the whole UK economy (1.2%). Hospital productivity in the English NHS has been much lower, rising by only 0.1% per year between 2009/10 to 2014/15. 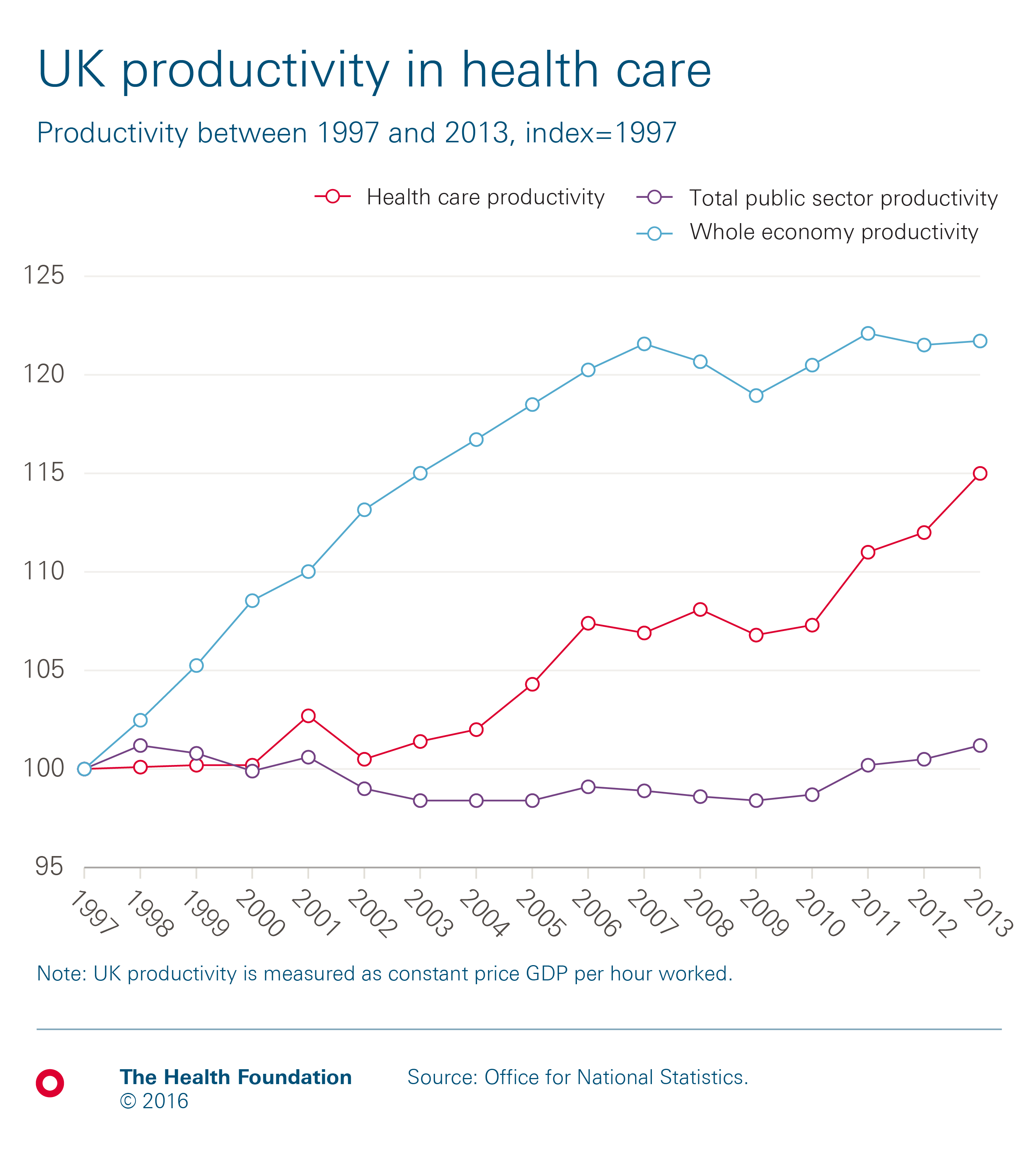 What is the current picture?

In recent years, financial pressures have been a prominent issue for the NHS. Let’s take a look at the current situation in England.

How has the financial performance of English NHS trusts changed?

The NHS budget is under increasing strain and trusts in England have seen a steep decline in their financial performance, finding it difficult to balance the books. In 2015/16 NHS providers reported a net deficit of £2.5bn – a sharp decline from 2012/13 when providers last achieved a net surplus. The proportion of trusts reporting a net deficit rose from 12% in 2012/13 to 65% in 2015/16. Pressures are still being felt this year – in the second quarter of 2016/17 the NHS deficit was £648m. 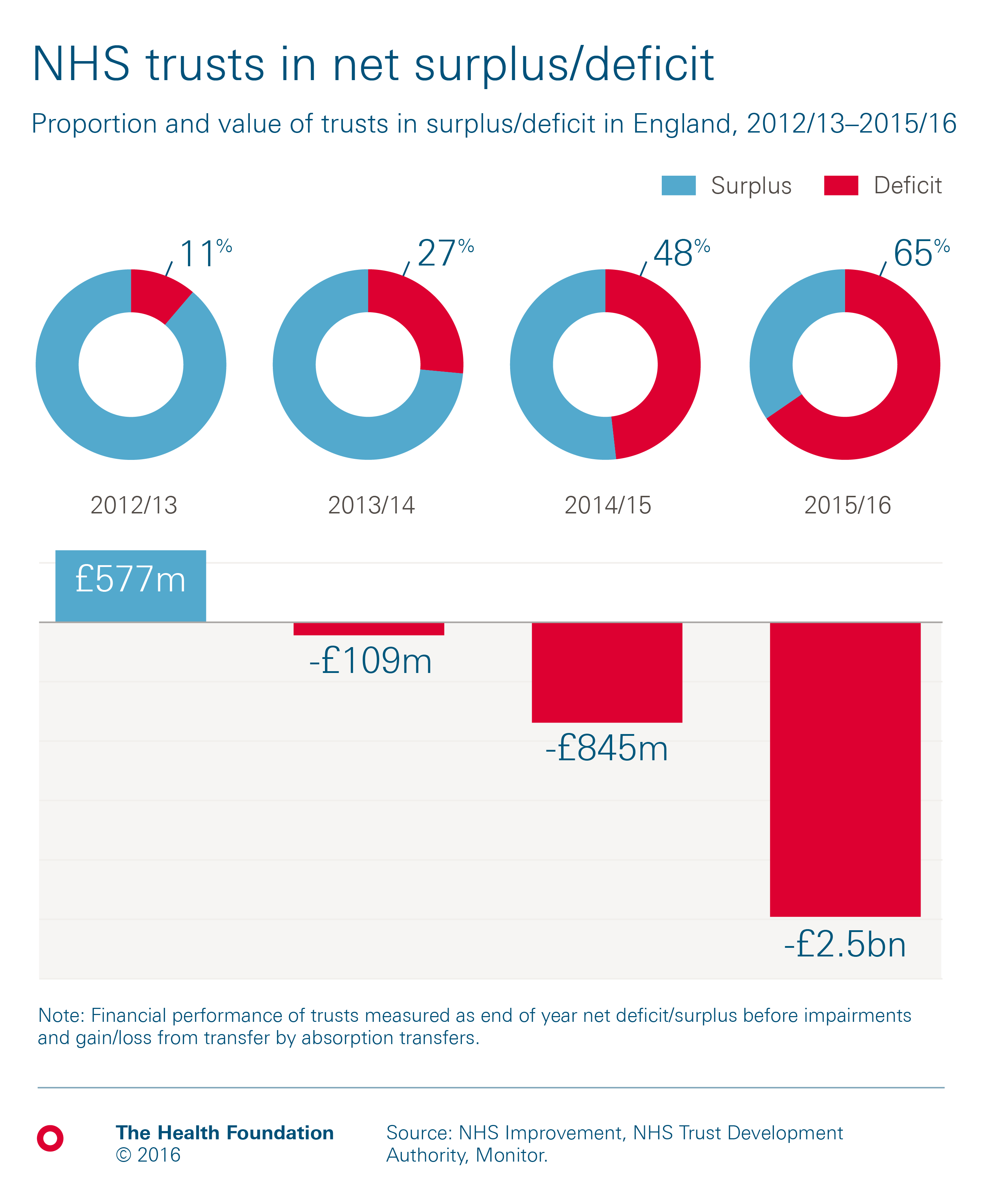 How do current funding plans compare to the historic trends? 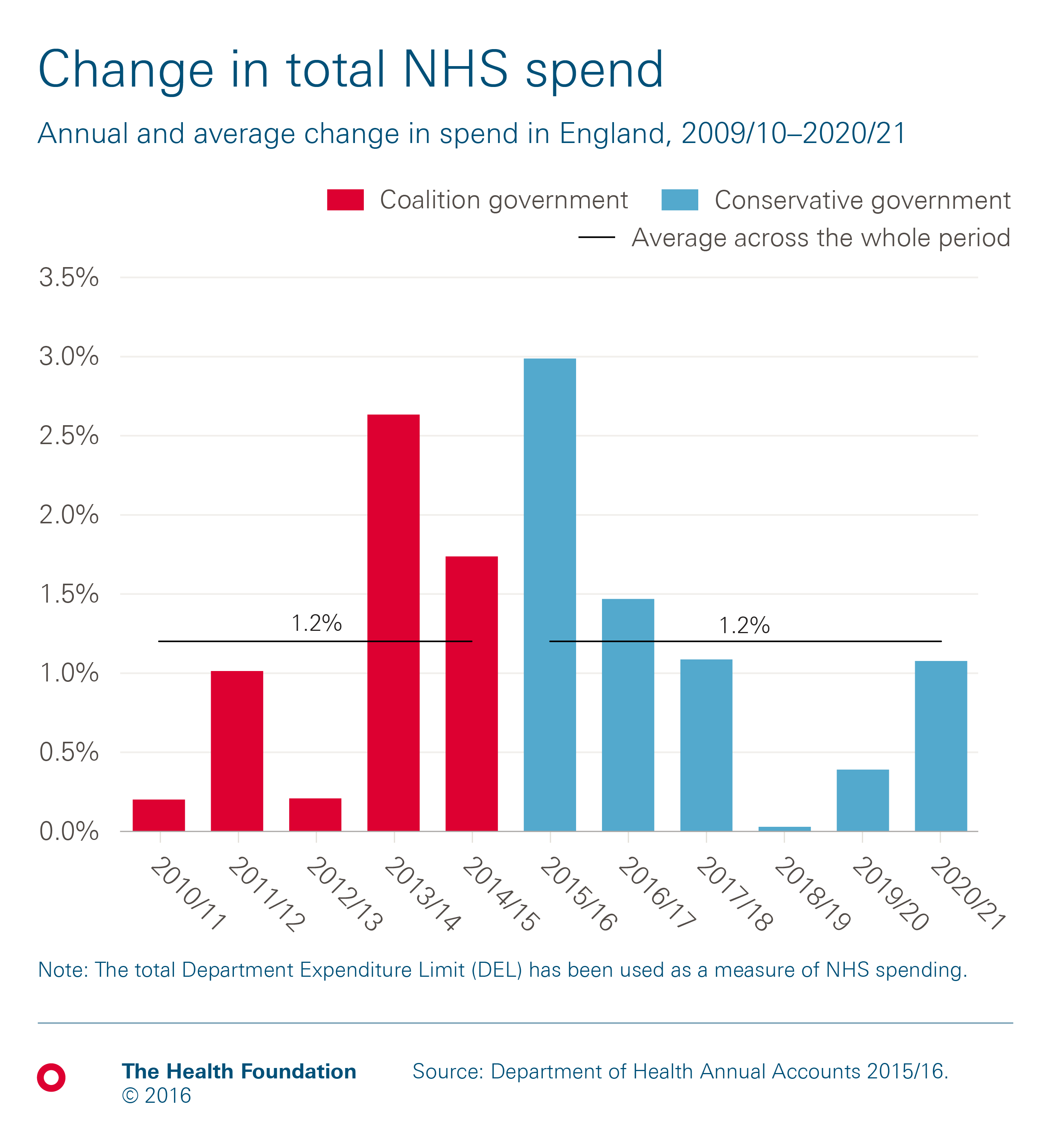 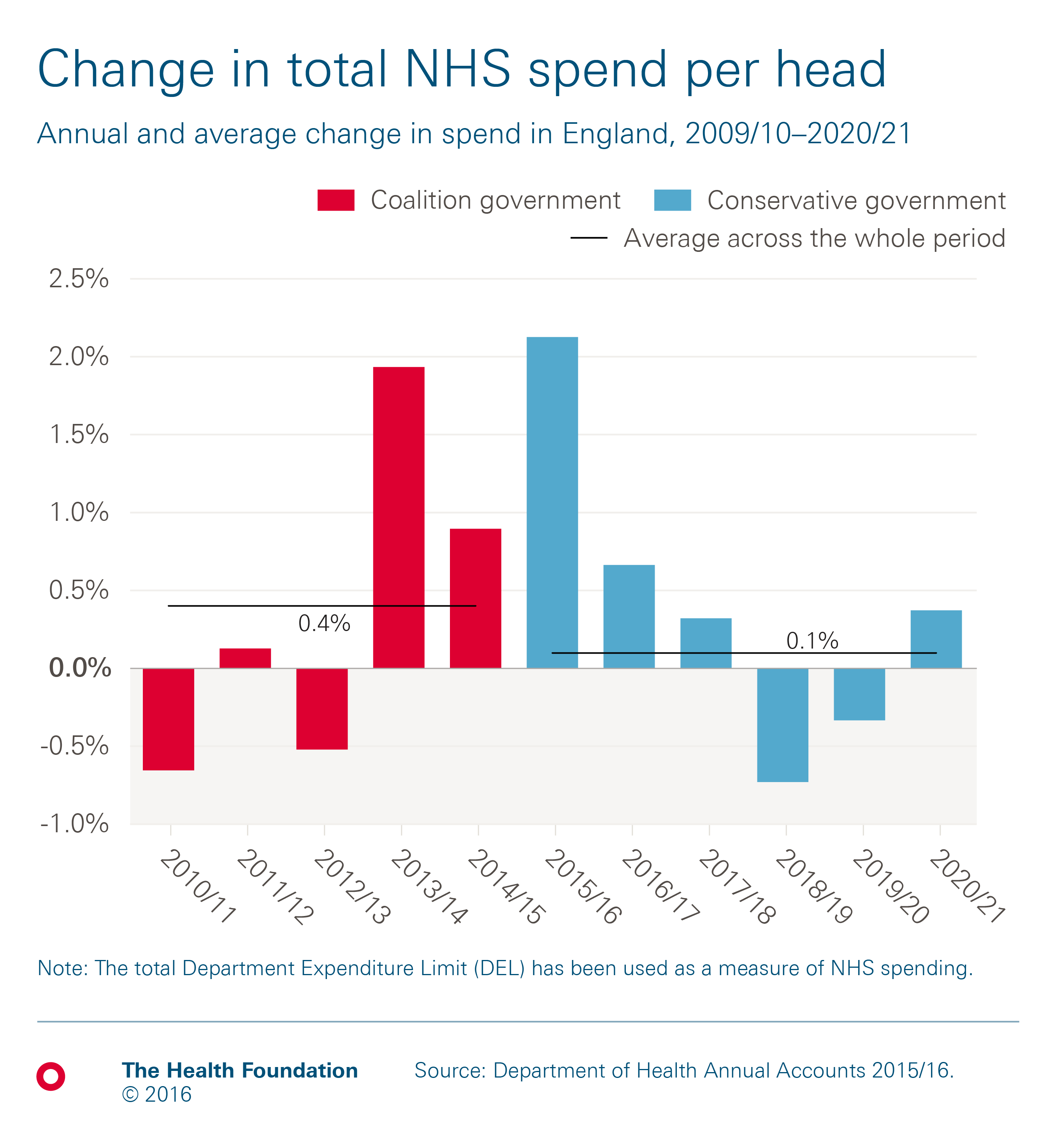 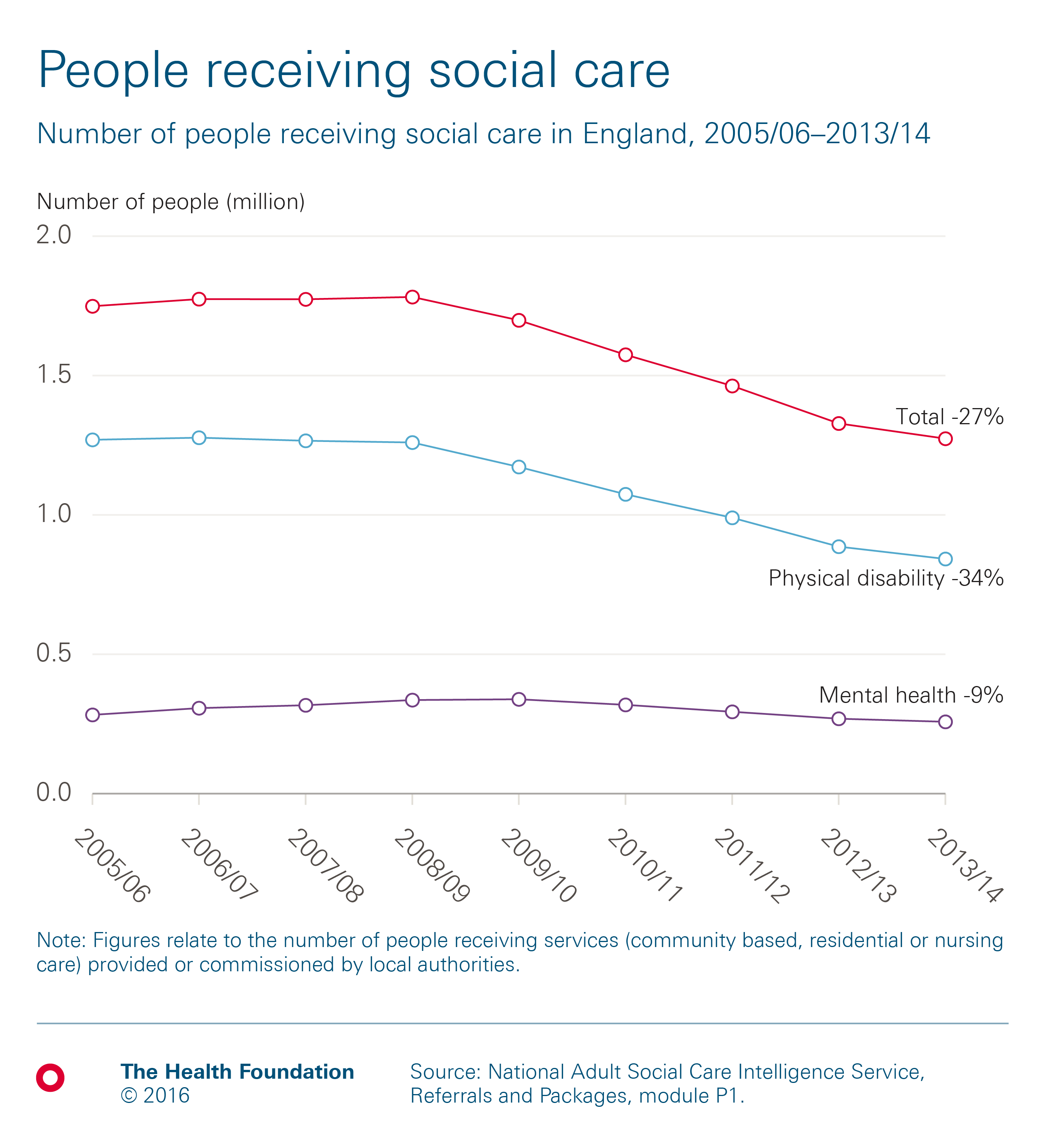 Does everyone who needs social care support receive it? 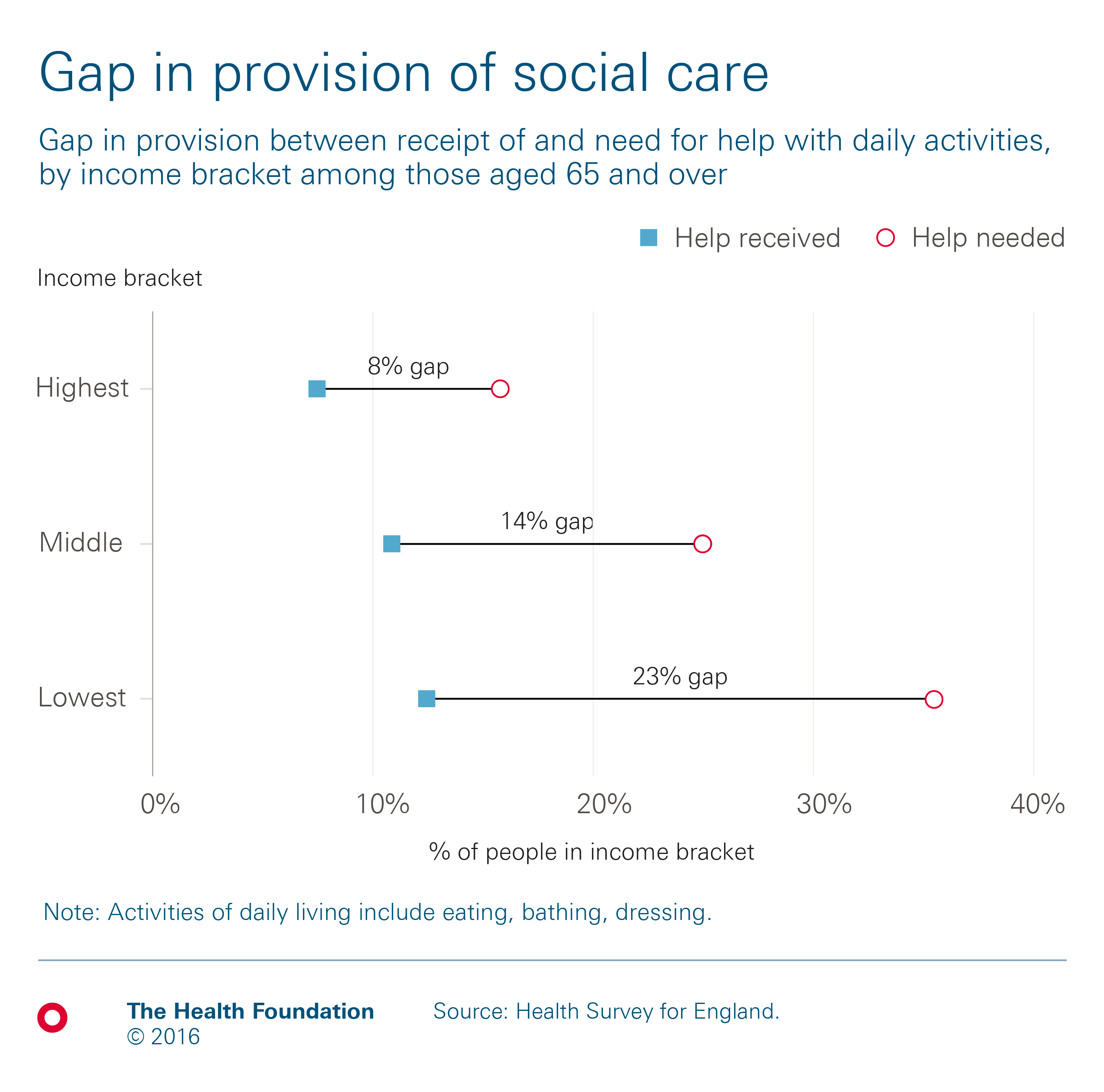 Both health and social care in the UK face a potential funding gap over the next 15 years.

Spending pressures for the NHS across the UK are rising every year, due to a growing and ageing population, rising number of people living with chronic conditions, and increases in the cost of delivering services. The rate at which total cost pressures rise will largely depend on the rate of efficiency growth that the NHS can achieve, and the rate at which pay rises.

Our report, Filling the gap, gives more information on how we’ve calculated the funding gaps in this section.

The chart below shows our projections for the rate at which spending on the UK NHS would need to rise over the next 15 years to maintain the quality and range of services provided. 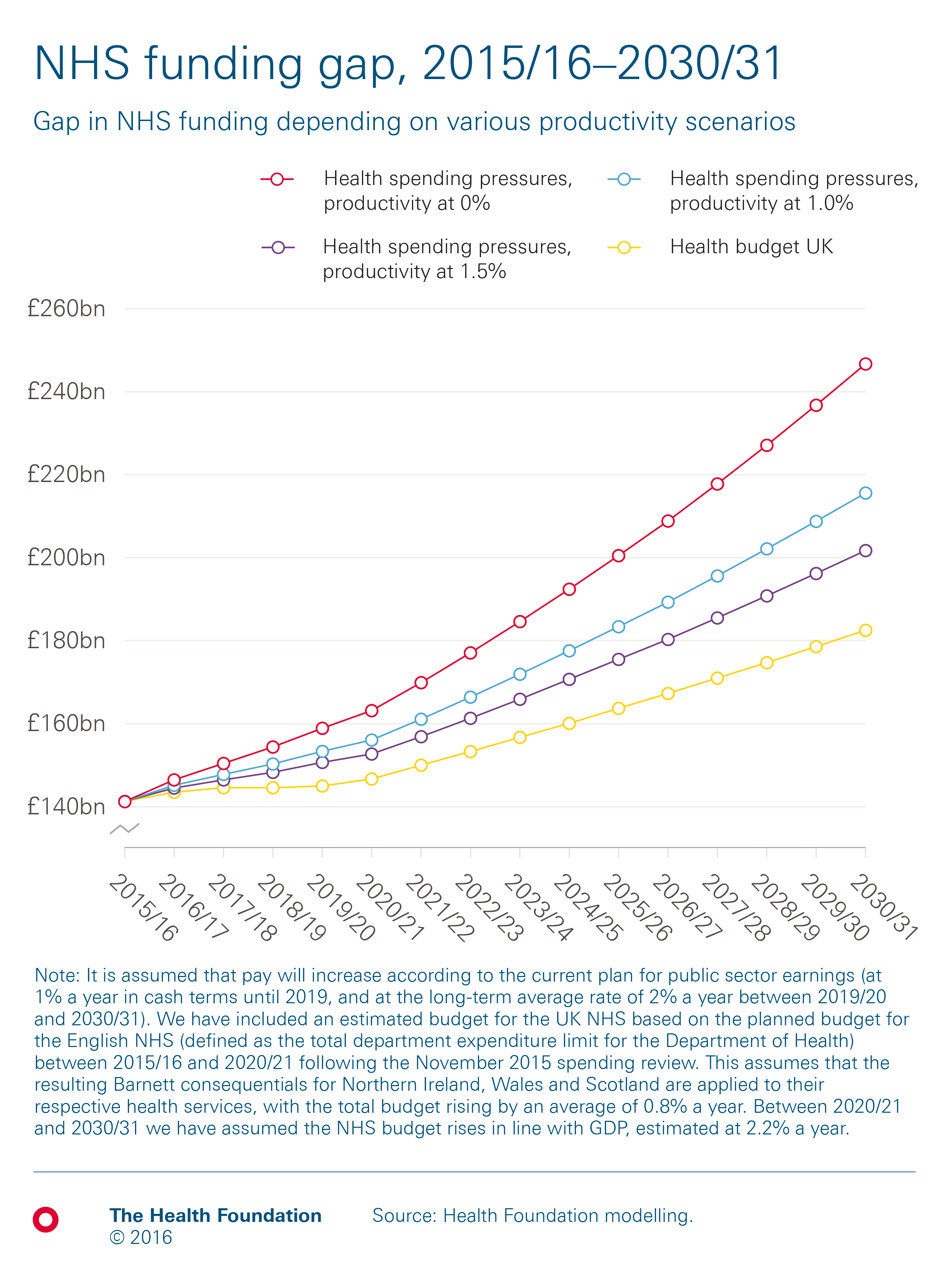 Pressures on publicly funded adult social care are projected to rise by an average of 4.3% a year, using modelling by the London School of Economics. We assume that between 2015/16 and 2019/20, social care funding may rise by an average of 1.6% a year, based on projections for England including funding from the new council tax precept and additional investment through the Better Care Fund. Between 2019/20 and 2030/31 we assume that funding will rise in line with projected growth in GDP.

Under these assumptions, there would be a funding gap of £9.2bn for adult social care in the UK in 2030/31, worth 40% of the projected budget. 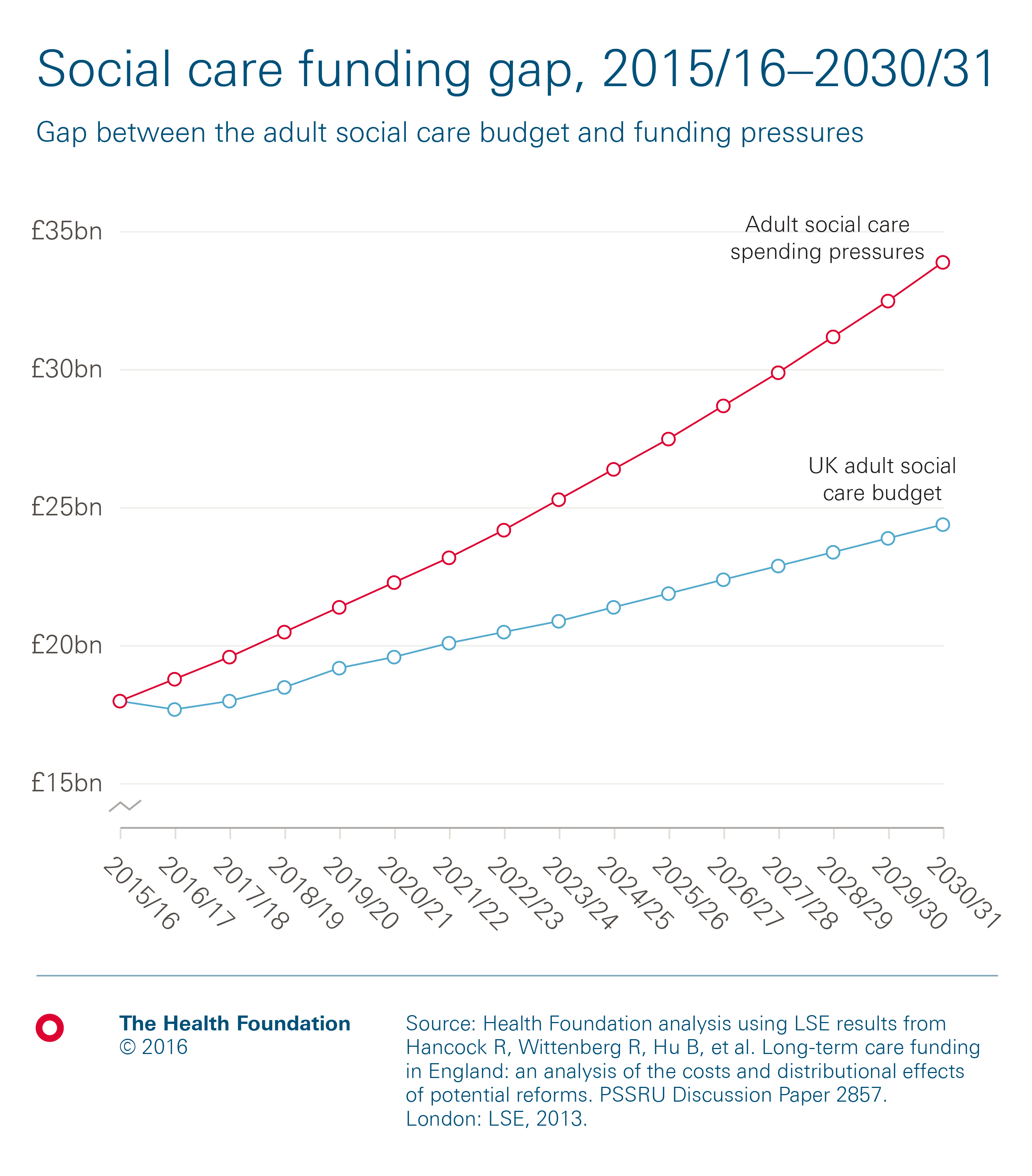 How will health spending change in the long term?

The Office for Budget Responsibility (OBR) is responsible for producing regular projections of the UK’s overall fiscal sustainability, including projections of health spending pressures. Its modelling suggests that health spending for the UK would need to rise to between 8.8% and 13.6% of GDP by 2030/31. The range depends on whether productivity grows in line with whole economy forecast (2.2% a year) or the more likely historical trends in health sector productivity of 0.9%. Either way, this is an increase from the 6.9% of GDP in 2019/20 that is currently planned. 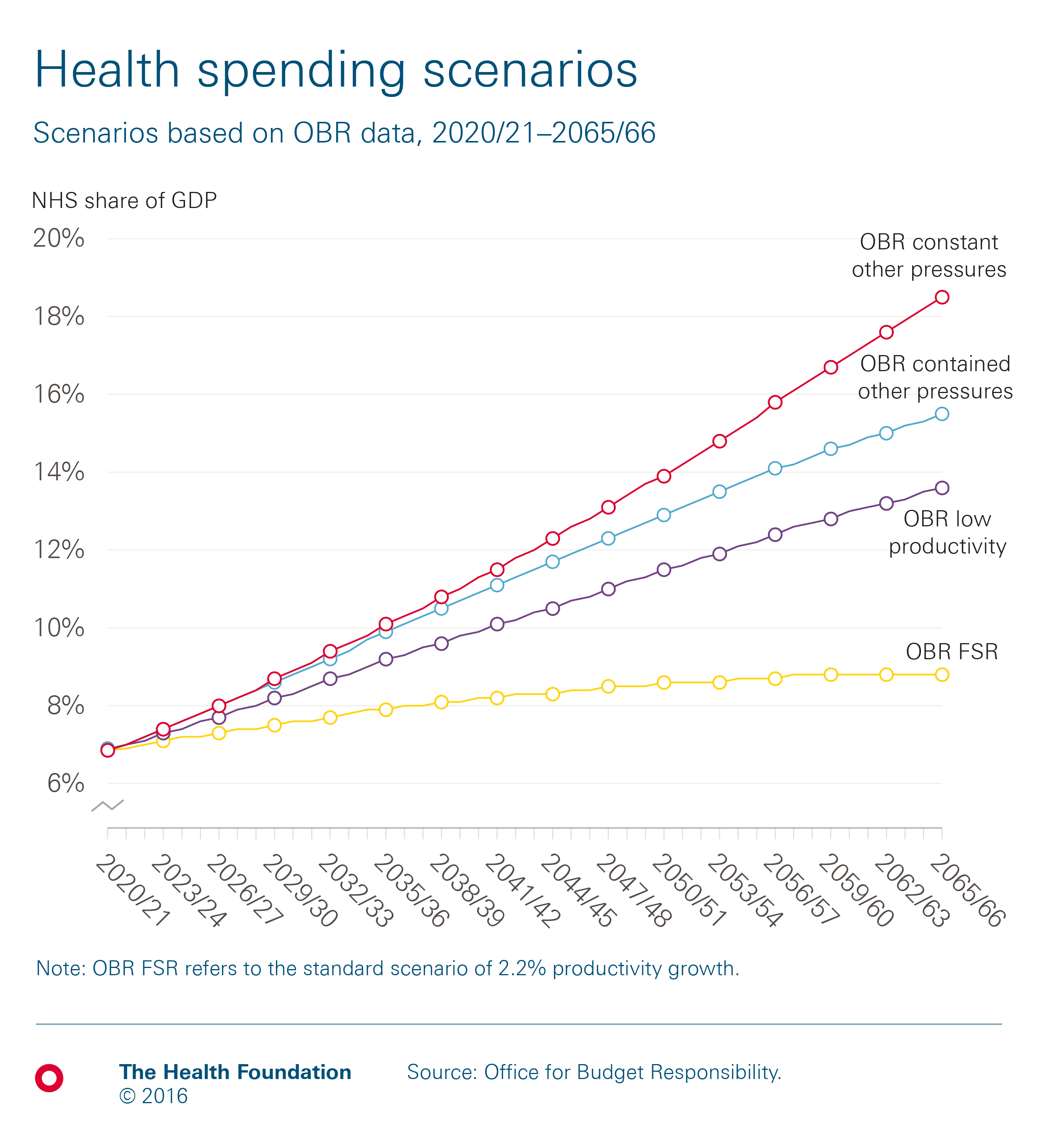 Definitions of ‘health’ used in this work

Health spending can be defined in a number of ways and, as a result, there are many ways to measure it.

For the purposes of this work

Charts and infographics on health and social care sustainability

Chart of the month

Our views and analysis on health and social care from the 2019 General Election.

Our response to the publication of NHS England and Improvement's monthly performance statistics.

Webinar: After COP26 – what will it take to get the NHS to net zero?

A panel discussion exploring how the NHS can achieve net zero – from an international, national and...

Health Foundation response to Office for National Statistics data on deaths in the care sector in...

@francespushkin Thanks for sharing this!