Unfortunately, your browser is too old to work on this website. Please upgrade your browser
What should be done to fix the crisis in social care?

Improving and expanding services is important. But this will not address the fundamental shortcomings of the system that most previous reform attempts have grappled with. People face great uncertainty about the future care costs they may incur, often having to sell their homes to pay for care or spend all of their savings. This uncertainty means that people are unable to plan ahead, creating fear and worry about the future. Without addressing this issue, Boris Johnson's promise made on the steps of Downing Street will not be delivered.

'My job is to protect you and your parents or grandparents from the fear of having to sell your home to pay for the costs of care.'
(Boris Johnson, 24 July 2019)

What creates this fear and worry? Under today's system, people with assets above £23,250 must pay for their own social care. But these costs are highly uncertain, and not spread evenly across the population (see the chart below). Some people may need no care at all, while others may need support in a care home for a decade, costing hundreds of thousands of pounds. The means test is more likely to affect older people in the care system, who have had longer to build up their assets.

But for social care, there is no way for individuals to insure themselves. The private sector does not provide comprehensive insurance for social care costs. The same is true in other countries. This is for several reasons, including the challenges associated with predicting future care costs. Even if they did, these products wouldn't work without making them compulsory, given the market failures associated with voluntary insurance, such as 'adverse selection' (where sicker than average people sign up, increasing premiums). A compulsory insurance scheme would require major government involvement, including in underwriting costs, and may not help the current generation of older people. A voluntary scheme would also be unlikely to protect younger adults, who account for around 50% of the cost of the current care system.

This tells us that the government must play a fundamental role in providing people with protection against social care costs, pooling risks across the population in a way the current system doesn't. But it leaves choices for policymakers about the kind of protection offered.

Find out more by clicking below.

What kind of protection could be offered?

One approach would be to fund social care in the same way as the NHS, so that when individuals need care, the costs are covered by the state. We'll call this universal and comprehensive social care.

Under a universal and comprehensive model, the government must decide what kinds of care costs are included in the state's 'offer' – for example, the level of social care needs covered and the types of support that can be funded.

If the state was to cover spending on adult social care for all people currently receiving services in England (assuming all current self-funders would be eligible for publicly funded care under the new model and that policy was fully operational in 2019/20), this would equate to somewhere between £6bn and just over £11bn total public spending in 2019/20. (This figure doesn't include the costs of meeting additional unmet need that would likely present as a result of the policy change.) The lower estimate involves applying average state spending to those currently in the private system (so is therefore almost certainly an underestimate, given that self-funders pay higher rates to cross-subsidise low fees paid by local authorities), while the upper estimate includes the gross costs of those currently in the private system.

The principal objection to funding social care like the NHS, however, tends to be its cost to the state. Reducing these costs means reducing the state's 'offer' and individuals paying for some portion of their care.

For example, in Scotland, people over 65 (recently extended to all working-age adults) receive free personal care – including personal hygiene, continence, diet, mobility, counselling, simple treatments, and personal assistance services – in their own homes, if their needs are deemed eligible after a local authority assessment. The government contributes up to £177 a week to personal care costs for people living in care homes, with a further payment of £80 to people who need nursing care. But individuals cover additional costs, including contributing towards living costs if they need residential care (subject to a means test) – just as they would if they were living in their own home. Free personal care allowances in Scotland only meet around 25% of the weekly costs of a residential care home.

Introducing the Scottish system in England would require around £4.4bn additional government investment by 2019/20, growing to £5bn by 2023/24. This assumes a small increase in demand associated with introducing the policy, as observed in Scotland.

Under this kind of approach, the government is choosing to provide some level of social care support for all. For many, this would be an improvement on the current system. It would mean a more equal system for the care needs covered and clarity on the state's 'offer' to the population. But individuals with persistent and severe care needs – for example, a person with dementia, needing high intensity care for a decade – would still face high costs. And all individuals would still face uncertainty about what the future holds. 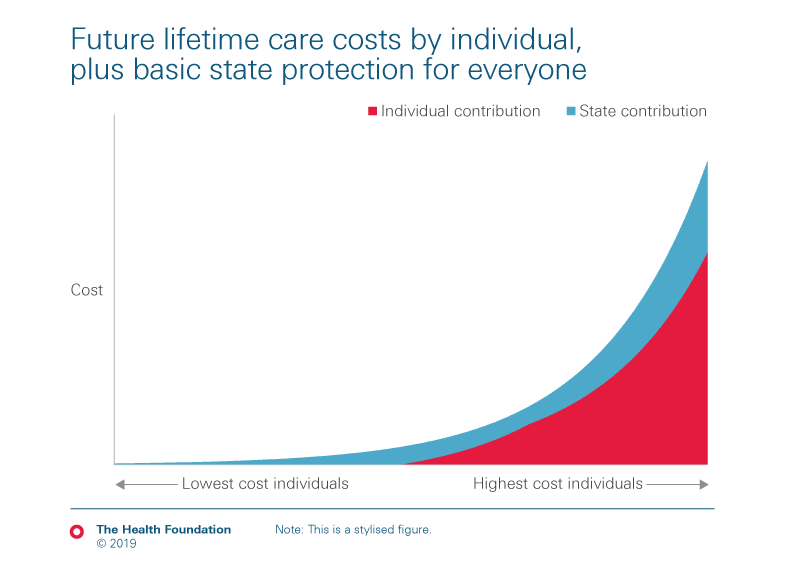 An alternative approach is to start by protecting individuals against catastrophic care costs – insuring against risks at the other end of the spectrum to the Scottish model (see the chart below).

This approach is based on economic theory suggesting that – unless the full costs of care are to be insured – it is preferable to cover all costs of an uncertain risk (ie the risk of needing social care) above a certain limit, rather than meeting some portion of costs with no limit.

The capped cost model, proposed by the Dilnot Commission in 2011, is designed to target additional state funding on individuals with the greatest and most expensive care needs over their lifetime.

Under this model, people with sufficient means pay their own care costs up to a cap. After that, the state pays (though, again, some costs – like accommodation in a care home – are not all included, and the cap only applies to eligible needs). Dilnot's recommendation was for a £35,000 lifetime cap in 2010/12, which would have risen to around £46,000 today. The government's proposed cap, before they ditched the idea, was £72,000 in 2016. Either option would eliminate catastrophic costs associated with care needs and target additional resources towards those with most expensive lifetime needs. But both options would still leave many people with eligible needs responsible for their own care costs until they hit the cap. These options also fall short of providing equal care for equal needs (as a universal model would). 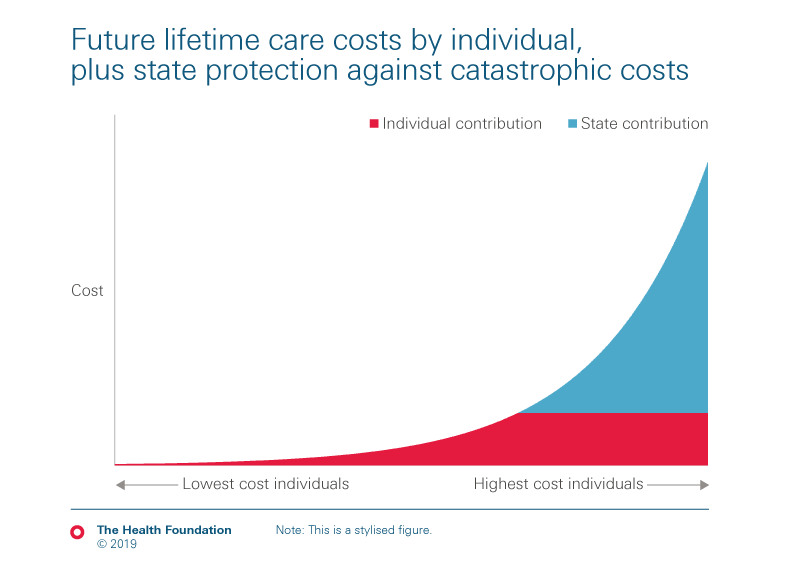 Dilnot's proposals also included a sizeable individual contribution to general living costs for people in residential care, at £10,000 a year (equivalent to around £13,000 today were they uprated as Dilnot proposed). This means that, in practice, individuals with long-term care needs may still need to draw on capital after hitting the cap. Reducing this contribution – for example, bringing it closer to the new full state pension (at just over £8,700 a year) – could make this model more generous and shift the balance of costs further towards the state.

RT @caraleavey: With today's new spending plans for rebuilding a post-COVID-19 world, we've set out 5 key lessons from lockdown for a bette…