Spending on health: How does the UK compare internationally?

How much should we spend on the NHS? Many feel that we should be spending more. And not without reason, perhaps. With the majority of hospitals spending more than their incomes to treat ever increasing numbers of patients, with waiting times lengthening and other problems, more money would seem to be the answer.

Another common line is that we don’t spend as much as other comparable countries. This is a really compelling argument – if Spain and Portugal can afford to spend more, then why can’t we? This argument is in part what led to governments finding more money for the NHS in the early 2000s, and it continues to play well to this day. For instance, in 2012 OECD data suggested that we spent below the EU-15 and OECD averages.

But a new, comparable definition of health spending adopted by the OECD in 2011, and finally by the UK last year, suggests that the UK actually spent above the EU-15 and OECD averages – as a percentage of GDP – in 2014.

Compared to the old definition, what now constitutes spending on ‘health’ (at least for the purposes of international comparisons) includes much more of what we in the UK have traditionally thought of as ‘social care’, as well as spending on the NHS and preventative care. Notably it excludes ‘capital spending’. This has meant a large accounting switch from social care to health care spending in the new OECD figures.

We still spend less than countries such as France and Sweden, but a similar amount to Spain and Portugal, and we are not far behind countries such as Austria and Belgium. Measured by health spending per person, however, the UK is a little below average, so that money is being spread more thinly. 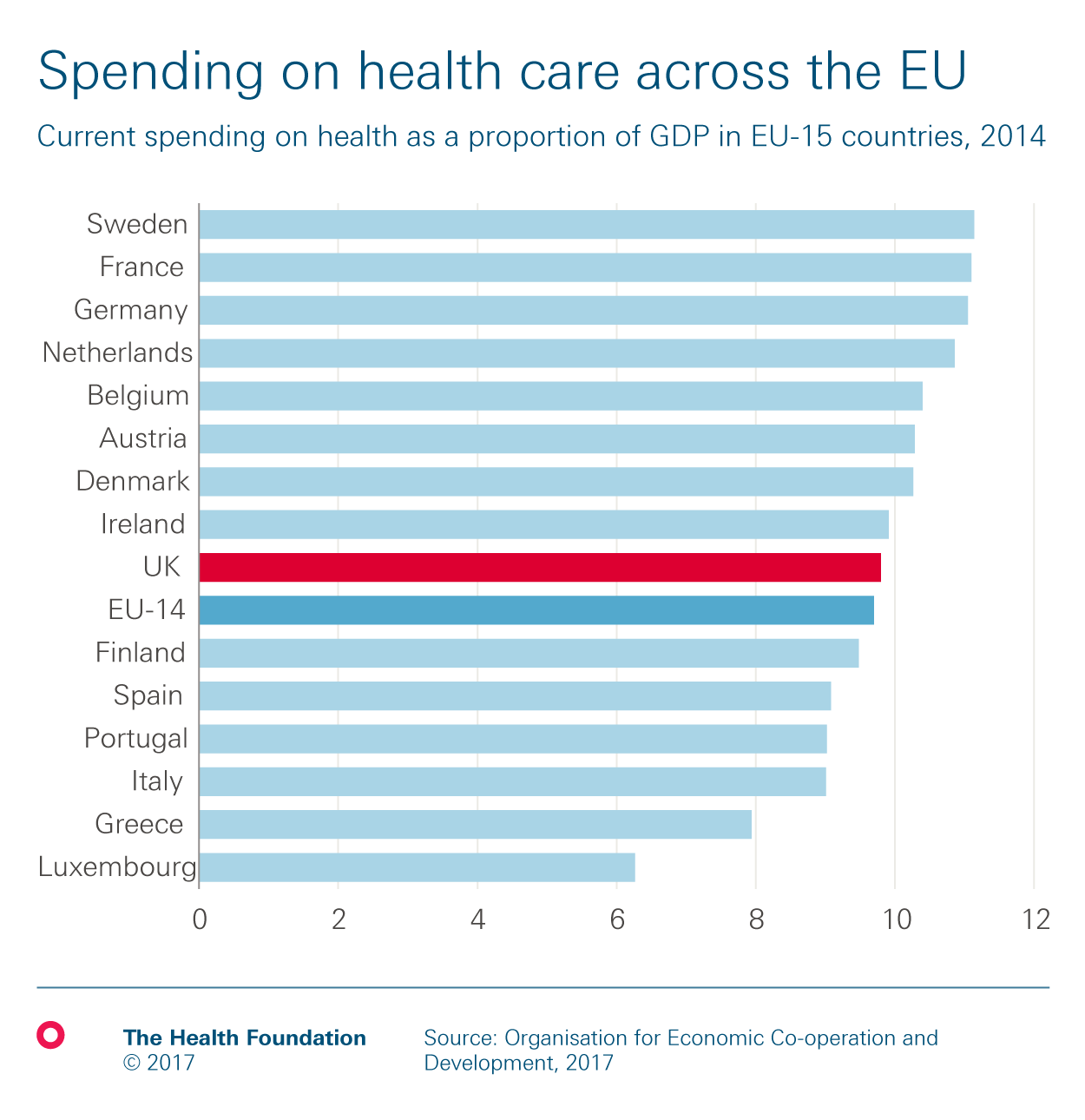 The link between wealth (measured by GDP per person) and the amount spent on health is well established: richer countries not only spend more on health care in absolute terms, but also more proportionally than poorer nations. It also tends to be the case that over time individual countries tend to devote proportionally more of their extra wealth to health care. (In this relationship between health spending and wealth, for every $1000 increase in GDP per person, you would expect health spending to rise by about $120 per person.)

The UK is spending what we would expect given its wealth. We spend $530 per person less on health than, say, Belgium, but our per person wealth is less the Belgians’.

So does this mean that we’re spending the right amount on the NHS and we can all move on from this debate? Of course not.

Understanding how much or little we spend in comparison to other countries is important information, but it’s not the only piece of information. Providers are still in deficit, services are still being rationed, and staff are still short on numbers and pay. Moreover, the OECD accounting changes also mean that we are now spending much less on social care than we thought – at least from the point of view of comparisons with other countries. (Unfortunately, lack of internationally comparative data obscures this.)

And in any case, while the relationship between wealth and health spending is strong across countries, it is not perfect – France and Sweden spend more than might be expected given their per person GDP.

Choices about spending – on health care or other things – are only partially informed by national income. At a micro level, if you’re doing your household budget and want to know if you’re spending too much or too little on groceries, you don’t just look up how much the average person spends. Maybe you live alone and can spend a little less. Maybe you care about eating good quality produce and so spend more. Or maybe you buy in bulk to make things go further. You take into account not just the crude comparison, but also the views of the household and an understanding of whether you’re able to get more food for your money. You may also try and be realistic about quality. If you’re okay eating average dinners – and would rather spend your money elsewhere – you may only spend in line with the average. But if you want and expect incredible quality, you need to pay more.

At the macro level, how much we spend on health is a political choice – informed by the preferences of the population and what we can achieve with different levels of spending, determined by the efficiency of the system.

How much we should spend on health care is still a live and important debate, but the argument that we should spend more simply because we spend much less than the rest of Europe isn’t enough anymore, if it ever was.

This blog was co-written with John Appleby, director of research and chief economist at the Nuffield Trust. Ben Gershlick (@BenGershlick) is an Economics Analyst at the Health Foundation.

What does the public think about NHS and social care services?

The Health Foundation commissioned Ipsos MORI to do a survey of the general public in Great Britain...

There is a strong relationship between debt and health. Our analysis highlights that 20% of people in problem deb… https://t.co/rbJuy7LITI