NHS winter pressures: How well prepared is the NHS in England?

About 6 mins to read
Rebecca Fisher
Blog
Quality of care

Hospitals’ attempts to cope in winter symbolise the wider problems facing the NHS and social care. Winter pressures shine a particularly harsh spotlight on the gap between rising demand and stagnating budgets. Last winter hospitals struggled, even without a flu outbreak or a prolonged cold spell. Headlines shouted of overflowing emergency departments, with ‘black alerts’ in some hospitals leading to diverted ambulances, cancelled operations and patients waiting on trolleys for hospital beds.

Planning for this winter began in the summer. NHS England and NHS Improvement proposed action in four interlinked areas to prepare as well as possible for the winter. In a series of four blogs, we will explore these plans and compare the NHS and social care system’s current winter preparedness with that of 2016:

In this first blog, Dr Rebecca Fisher looks at the measures taken beyond hospitals to avoid the known threats of winter.

Like any GP, I know all too well that several health problems can be caused or worsened by cold weather. Certain viruses – including flu and vomiting bugs like Norovirus – are more prevalent in winter. Cold air, combined with the abundance of cold and flu viruses, increases the incidence of acute asthma attacks, and Asthma UK research shows that deaths from asthma rise sharply in the winter months. Heart attacks and more minor ailments such as dry skin, cold sores and painful joints are also more common in winter. This means the NHS faces much greater pressure, both in the community (including GPs and pharmacy services), and in secondary care.

The NHS is not helpless in the face of winter. Public health strategies have a significant role to play in reducing illness, and educating the public to manage illnesses at home.

Each year, the flu vaccine is free to people at greatest risk of catching it, and those at greater risk of complications.

Following media reports that Australia and New Zealand have just experienced their worse flu outbreak in a decade, increasing flu vaccine rates might be particularly important this year. Encouraging greater uptake of the flu jab, and extending the national vaccination programme to cover more of the population, are core NHS strategies for this winter. More children – or ‘super-spreaders of flu’, according to Public Health England – are being offered the vaccine than ever before, including  year four pupils (eight year olds) for the first time.

A comparison of flu vaccination rates between now and this time last year suggests that the increased effort may be yielding results, particularly in adult populations. 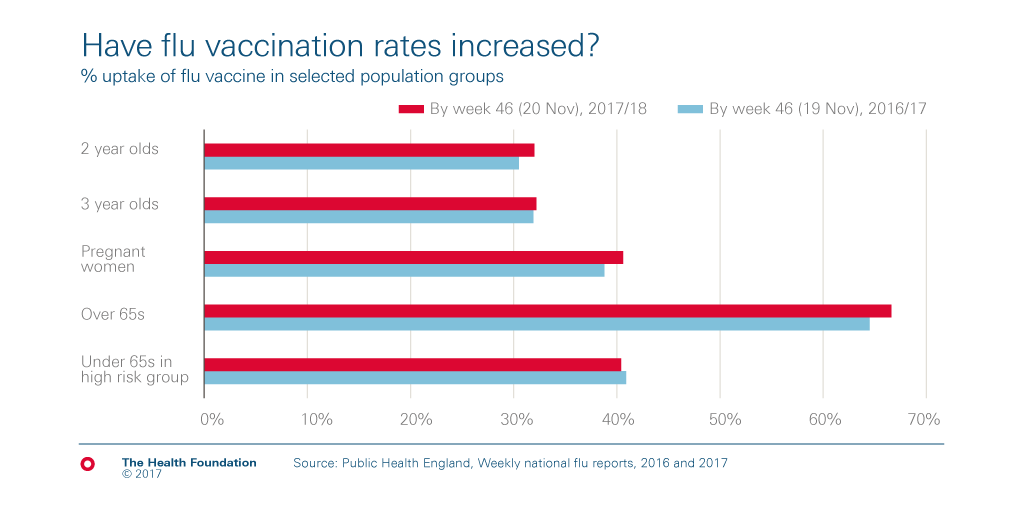 It’s too early to know whether this increase in vaccine uptake will slow an outbreak of flu. The vaccination campaign is ongoing, and, as the precise viral strain causing flu varies year on year, it’s hard to know how effective the vaccine will be. Many of us will be keeping a watchful eye on Public Health England’s weekly flu surveillance data as the season progresses.

Alongside efforts to prevent avoidable illness, NHS winter plans also seek to improve access to primary care. Routinely offering GP appointments every day from 08.00 to 20.00 is intended to reduce some of the pressure on A&E departments. In September 2017, NHS England reported that 32% of registered patients had full access to routine appointments outside core hours – up from 23% in March 2017 and 18% in October 2016.

For winter 2017, NHS England is expecting extended access to general practice to cover 50% of the population (and 100% of Londoners will have permanent access to evening and weekend GP appointments by March 2018). Extending access to general practice may benefit patients, but it is not clear if it will reduce emergency department attendances. Indeed, draft NICE guidance concludes that the evidence base is not strong enough to recommend extending GP access.

Supporting GPs to extend their hours

Out-of-hours GP services provide care outside of ‘core contracted hours’ (08.00 to 18:30, Monday to Friday). As it did last winter, NHS England is running a ‘winter indemnity scheme for GPs’. This pays the indemnity (a professional insurance required for doctors to practise) for any out-of-hours work that GPs take on between 1 October and 2 April. In the past, the prohibitively high cost of indemnity for out-of-hours services acted as a disincentive for GPs to take on extra work. According to NHS England the scheme helped support an additional 80,000 GP appointments last year, at a cost of £5 million. This winter, £8 million will be invested in the scheme.

All major A&E departments were expected to have some form of ‘primary care streaming’ in place by 1 December. This approach aims to deal with more minor attendances, leaving A&E to deal with more complex patients. The crucial question will be whether GPs undertake emergency department and out-of-hours work in addition to their usual clinical work, rather than cutting back on routine hours. If they do, capacity should increase. If they don’t, these strategies may reduce access to core general practice and add to pressures facing this part of the NHS.

Seeking urgent help, but not from A&E

For people in need of urgent but not emergency care, NHS 111 is available across England. It aims to make it easier for people with urgent health care needs to access urgent services. A frequent criticism of 111 is that although intended for non-urgent conditions, it sends a relatively high proportion of cases to A&E. To combat this, NHS England hopes to increase the proportion of calls receiving clinical assessment by a nurse or doctor. As of September 2017, NHS England reported that there had been 10 consecutive months of increases in the proportion of calls with clinical input, from 23% in January 2017 to 37% in October. 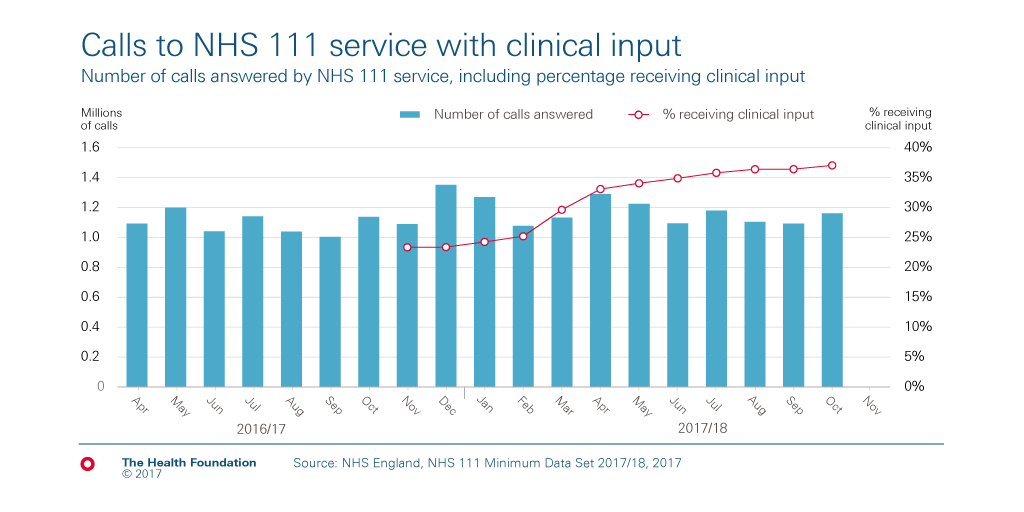 Public awareness of 111 seems to be rising, and with it call volume. Efforts to improve 111 assume that having more clinicians answer calls will result in more queries being dealt with over the phone, not directed to A&E or general practice. However, it’s hard to find evidence to support this assumption. The data may not tell the full story, but does suggest that despite an increasing proportion of calls receiving clinical input, the proportion of patients directed to A&E, ambulances and primary care has remained relatively constant.

Outcome of calls to NHS 111

Staying well is the best option

Helping people to stay well and avoid going to hospital is a key strategy in managing predicted winter pressures. Extending access to general practice has long been a government priority, but there is limited evidence to suggest that it will significantly reduce pressure on emergency services. Last winter was the worst in NHS history, despite a relatively light burden of flu and norovirus. If the expected increase in flu and norovirus cases happens, even with better preparation, pressures on already stretched services will rise.

At my surgery, we’re already seeing the start of seasonal ailments; on the NHS front lines it’s hard to feel optimistic about the winter ahead.

Dr Becks Fisher (@BecksFisher) is a GP and Clinical Fellow at the Health Foundation.

In this 2017 blog about winter pressures on the NHS, we look at what is happening at the front door...

NHS winter pressures: Being in hospital

In this January 2018 blog, we looked at what was happening inside hospitals last winter.

Association between household context and emergency hospital use in older people

Relationship between domestic environments and use of hospital care by older people.

COVID-19 has brought disruption to health care systems around the world. Our analysis explores how services in the… https://t.co/tyx1iYlxqR